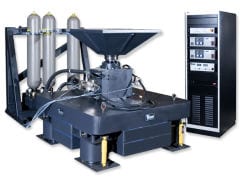 Team Corporation’s Subsidiary Shock Test System (SSTS) is able to reproduce the entire acceleration time-history resulting from detonation of the test charge as described in MIL-S-901D. This includes the initial shock pulse from the detonation and the “bubble pulse” that follows in approximately 650 msec.

The SSTS has also shown the capability to reproduce the decaying sinusoid that is sometimes measured in the frequency band centered around 60 Hz.

The MIL-S-901D specification involves mandatory shock testing procedures for shipboard machinery, systems, structures, and equipment, excluding pressure hull penetrations on submarines. The purpose of these specifications is to confirm the ability of shipboard equipment to endure shock vibrations that might incur during wartime operations due to the results of nuclear or conventional weapons.

Based on the mounting requirements of these items, the spec breaks down the equipment into three classes:

This specification involves three types of tests, which are outlined below.

The shock response of a principal unit is primarily a function of the rigidity and mass of the item and the structure itself, the mounting location, and the configuration of the item. These items typically include valves, switchboards, steam generators, radio transmitters, diesel-generator sets, and missile launchers.

Examples are the power supply section of a radio transmitter, the diesel engine of a diesel-generator set, or the electric motor of an air conditioning unit.

Examples are resistors, relays, meters, thermometers, and gauges. Subassembly and assembly parts used may differ from those used in various equipment specifications or other acquisition documents.

Work With Team Corporation as Your Testing System Provider

Visit our video library for more.

Some of the highlighted features of the SSTS include the following:

Applications of the SSTS include but are not limited to:

How Can we help?

Put us to the test. Contact Team today to discuss your future test system requirements or to request service or preventative maintenance on an existing system. We look forward to working with you.